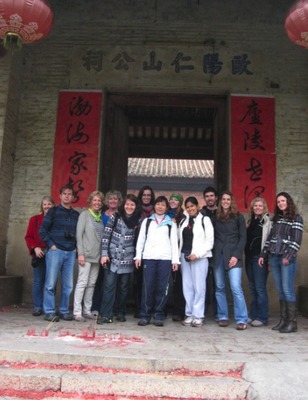 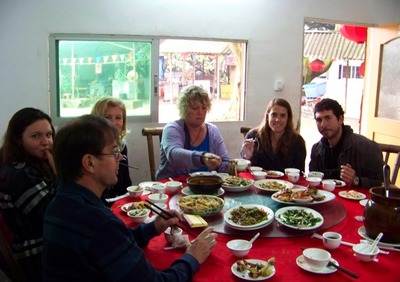 We had a glimpse of China as it used to be, on Saturday. The receptionist at school, Wendy, organised 10 of us to visit the ancestral compound in which she grew up.

The drive north, towards a place called Conghua, was a very uninspiring trip, along a 6-lane highway lined with concrete monstrosities. We stopped first at the village of Qian Guang, and spent some time poking around. Parts of it are hundreds of years old. It is completely abandoned, and most of the villagers live in apartment blocks nearby. Wendy couldn’t really explain if the villagers had a choice in the matter, or not. There is a tourist trail through the decaying houses, and several are being renovated as tourist shops. 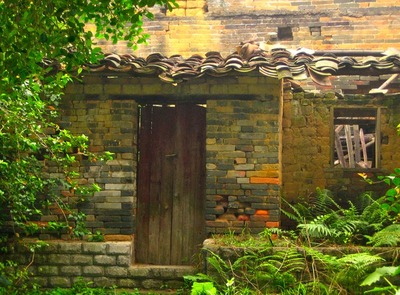 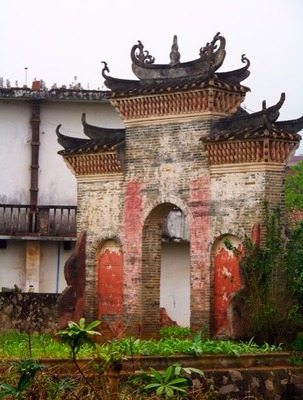 We then looked at a traditional compound, down the road a bit.  The layout is basically a clan hall, with rows of family cottages each side of it. There are still some people living in it, and it looked as though the gene pool was extremely small.

Because the day was getting away from us, we lunched at an outside restaurant, which are fairly common around the outskirts of Guangzhou. Basically it was a collection of huts in a circle, with either one or two round tables in them. Despite being rustic, they had an air-conditioner/heater and a basic karaoke set up. A Chinese friend of Wendy’s ordered. Through the window, we could see a rooster being selected for “preparation” for our meal. The food was actually much more enjoyable than that at a lot of the more expensive Chinese restaurants in the city. Wendy’s sister, Vivien, joined us.

Mid-afternoon, we drove along a road lined with lychee trees towards the compound. Even though it has been abandoned for more than 15 years, it is still very impressive. Originally it was walled, with a large watchtower at each corner. One remains – Wendy said the Japanese bombed the remainder. There was another story that the bricks were taken by the communists to build roads. 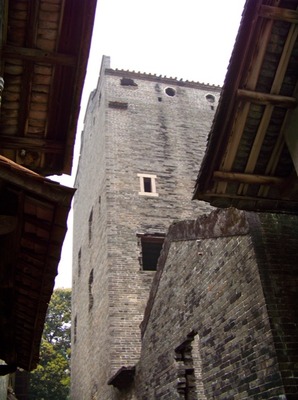 We had a sense of the lifestyle of the better-off classes, pre-Mao. The compound was very much like a small castle. The girls showed us a house they had lived in as teenagers. A family entered from the alley, and shared the living area and kitchen with the family that entered from the opposite alley. There was a hand pump for water, although Wendy said that, even in her time as a child there, the clan members drew water from the well at the front of the compound. The elders of the clan lived in the hall, which was also used for communal occasions.

Wendy told us that, during the Cultural Revolution, her grandmother was stripped of her jewellery and forced to parade down the street whilst being jeered and spat upon. It isn’t excusable, but it is understandable, considering that many of the people outside of the wall would have been doing it very tough.

It was a very enjoyable, interesting day, and we hope we can fit in a few more similar experiences in the next few months.