There are a few memes on the internet about surviving growing up in the ‘60’s and ‘70’s, long before the “Nanny State” reared its ugly head. Certainly, some of the things my generation did as kids were dangerous, and, maybe, some sort of regulation to minimise the “Darwin effect” is needed. However, in Australia, at any rate, there are a few too many “don’ts”. I read somewhere that nearly 40% of kids in the western world have never climbed a tree. My friends and I, at primary school, had access to a 40m pine tree. You could, literally, see for miles from the top. Obviously, we don’t want young folk doing that sort of thing unsupervised, but we do need more kids to get hot, tired and dirty out in the bush.

Boys (mainly), in the ‘60’s, played various versions of “war” – cowboys and Indians, allies vs. Nazis and samurai vs. ninjas. The bush around our three acres of scrub was perfect for me, my brothers and friends to indulge in running, hiding, building/making, learning about plants and animals first hand and camping. We would go on all-day hikes and cook sausages over a campfire on the way. There was the odd injury and one or two very close calls, but we all survived, and had a healthy respect of nature. We also gained confidence in dealing with unforeseen dangers, such as animal attacks, serious falls or getting lost.

So, once upon a time, I yearned for a bush block, in the middle of nowhere. With age came the realisation that nowhere didn’t contain much. Some people love that, but I still like being within striking distance of “mod cons”. Therefore, our current house was a real stroke of luck for someone who wanted some links back to his childhood without having to drive kilometres to “civilisation”. It is in an urban area, but backs onto a creek, with a ribbon of scrub along it. The beach is a 10-minute walk away and a short drive into the hinterland takes us to farms, forests and national parks. The climate allows us to spend a lot of time outdoors, and we can sit out in the backyard and almost pretend we are in the bush.

One thing that has really struck me about our area is how tame are the birds. I’ve had a magpie perch on my knee wanting something to eat. All of the birds treat Machiato, the world’s worst hunter, with disdain, and the mynas actually line up and taunt her. The picture (none them are of my photos) shows the more common birds in and about our garden. The last two are very annoying. The mudlarks (pee wees in N.S.W.) attack their reflections in the windows and glass doors, making the glass and the window sills filthy. The brush turkeys, if not spotted first, dig up the garden – they instinctively know which plants are the hardest to replace. The rest of the birds are more than welcome. 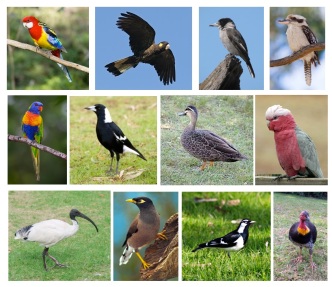 There are few animals by the creek. We have had blue tongues in the garage, and a water dragon laid its eggs by the garden shed. The local snake catcher collected the eggs and revealed that he has been very busy already this spring. He, unfortunately, dispelled my long-held belief that snakes and blue tongue lizards do not inhabit the same area, so I will have to be careful when cleaning up by the creek.

Spiders are very plentiful. We had a bloke come by to spray the house and garden to get rid of our plague of red backs 6 months ago. There are huntsmen in the shed and around about, as well as various garden varieties. We see few bees, but there is an apiarist three houses down so they might all live there. Frogs are rare, which might be a cause for concern.

We have a campfire down at the creek, which is great on dry winter evenings and I have built a platform in the large mango tree for Machiato and I (and Helen, if she wishes) to chill out. We get sunrise at the front of the house and sunset down the backyard. At night, despite the yard being lit up like the M.C.G. by Bunnings solar lights, the Milky Way is clearly visible. It’s a lovely place to be.

← Life is predictably unpredictable
A bit of empathy now and then. →