We had a brilliant day on Saturday that showed us what human beings are capable of when we are “on song”. TEDxUbud lived up to expectations and we were informed, entertained and inspired by some wonderful speakers and performers. There were talks about teaching young people to be happy or become media literate, talks about networking to save people from trafficking or to promote breast feeding throughout the country, or to come up with innovative ideas or to save coral reefs and inspiring examples of overcoming disabilities or providing books for students in remote areas.

Then we had an excellent band, one of the speakers also had us in stitches with a stand-up routine, and there was an amazing yo-yo exhibition (which also had the message that nothing is impossible if you stick at it).

The venue, Five Elements, is amazing in appearance and philosophy – I admire the approach to life of people who have a total commitment to the health and welfare of all living things, and lunch tasted quite good, from a carnivore perspective. 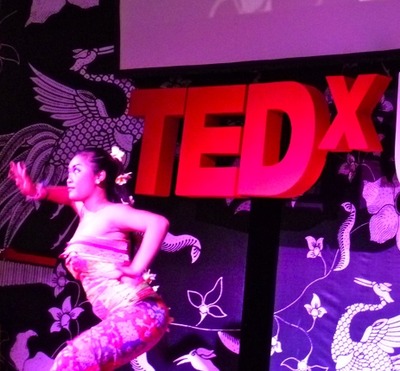 The thing about TED, generally, is that it is about ideas worth spreading, and Ubud lived up to the hype. The drive and energy of some of the speakers (and a good number of the audience) to make a positive difference to the lives of others was inspiring. We certainly feel privileged to be able to attend an event like TEDxUbud and share in the greatness of others.

However, our few days in Bali were not all uplifting. Helen had a quick trip into Kuta and vowed never to return, significantly unimpressed by the boorish behaviour of so many of our fellow Australians in the streets.

It was our visit to Ani, our former pembantu (maid) that really showed us how lucky we have been to have opportunities in life that most of the world’s population will never have. We listened, in disbelief, to her story that she, and other pembantu, were being paid less now than what we were paying 11 years ago, despite the cost of living being much higher. It was sad to realise that some people, to who, $100 is a minute fraction of their income, will not even pay $5 a day (for, usually, an 8-to-10-hour day) to their helpers.

The plus side was that her two boys, Mozes and Maleakhi, are doing well in the face of their circumstances, the former excelling at sport and the latter academically. In their own way, they are just as inspiring as the TED people.