Like folk in many parts of the world nowadays, we are over the weather. In our case, in Jakarta, it’s rain. Normally, the rainy season has ended well and truly by now, but it is doing more than just persisting – the past two days have seen as much rain as we have had at any time in the past 6 months.

For us, it is mainly an inconvenience, but for people in other parts of the Big Durian it is a disaster – friends in East Jakarta, who had never had any problems, had their house flooded, twice, before Christmas, and, yesterday, I spoke with a school principal who had been helping many of her staff deal with flooded apartments.

My “image advisor” suggested suggested that a haircut was overdue, and, on Wednesday, I could only get a 6pm booking at my usual place. It had been raining all afternoon, and we could not get a taxi to come, so I decided to cancel. Then, the rain eased, so I headed up the corner and, luckily, encountered a bajaj. Most sane people were still under shelter somewhere, so we had a quick run into Kemang.

Haircut completed, I hailed another bajaj for the return journey. As I got in, the heavens opened again. We had a fairly quick trip in the torrent. As we entered the western end of our street, we were going with the current, but, as we neared our lane, we were going uphill, against it. I got out into a foot of water, and then walked in ankle-deep water to our gate. Luckily for us, but not for our neighbour, the water rushes down into the property at the end of the lane.

Then, yesterday, after a meeting in town, we were on our way back to another meeting in Kemang. The deluge began on route, before noon. We were 25 minutes late, an acceptable margin of error in Jakarta. 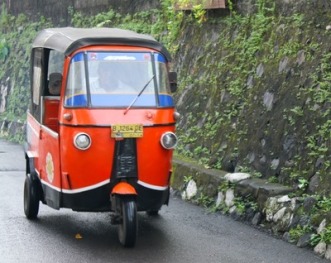 Back home, much later, we got ready to go back in towards town to meet a colleague for dinner. We walked out into the street and turned east, to get a taxi in the main street. However, during the afternoon, the last 100m to the main road had been concreted, wall to wall. There was plastic on top, and the local “area commander” who was in front of his house indicated we could go that way. Our feet sunk into the plastic, and got wet, but it was bearable. The plastic ended, and, in the dark, we assumed we were moving on to dry concrete. Wrong! They just didn’t have enough plastic. We returned, defeated, and offered a few descriptive words about the intelligence and competence of those responsible to the bystanders.

We were ready to give up, but, after changing shoes back at the mansion, we decided to go out into the next street, via an alleyway, and try to get to our destination. We found a bajaj, and induced him to take us to Blok M, much further afield than he would normally venture. He dropped us off beside a taxi, and we disturbed the driver’s smoko and he took us as far as he could to where we wanted to go (because of the one-way systems). We walked to the nearest building and asked a guard if he knew where the restaurant was – “Second floor”.

After a lovely evening, we waited for a while for a taxi, but ended up having a stress-free trip home.