February 18, 2012 · by Andrew Vivian · in Uncategorized · Leave a comment
It’s always interesting visiting a new place, but, if you live there for a while, you get a different experience. I’m sort of half-way between, living in a hotel room, in Dubai, for a month.

I actually had never considered even visiting the Middle East, for various reasons, but I’m glad that I’m here now. There is some amazing stuff, mainly because the sand is rapidly becoming covered with concrete and bitumen, and the odd bit of grass. Some of the buildings are amazing – even more “iconic” than in Beijing, if that’s possible. The amount of construction going on is phenomenal. It seems like Dubai will double in size in the next year or so.

It’s interesting seeing how people go about things here. It is far more liberal in a lot of things than I expected – people wander around in the full range of clothing, from head-to-toe black robes to skimpy shorts and a singlet. I was amused to see a bloke in white robes in a bar the other night with two women, neither of whom, I assumed, were his wife, with a cigarette in one hand (the bloke) and a large glass of red in the other. Still, that isn’t a common sight. The overwhelming majority of men dressed in that way act with the dignity one would expect. 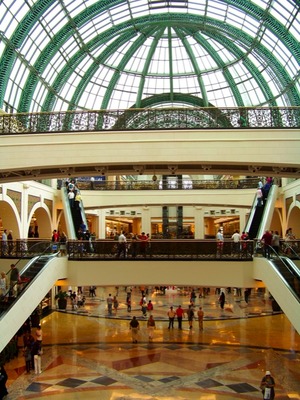 I made the tourist mistake on the bus – I got off the train and ran to the connecting bus to the Mall of Dubai. It was packed at the rear, so I followed a young women in through the front door. It was only after the bus pulled away that I realised that I was in the women-only section. I edged my way back to the mixed section.

I’ve done one visit to a school, which was interesting. It’s impressive that the Emirates have a vision for the future, and a major part is about quality education. The process for evaluating schools seems quite good, and there seem to be some very capable Emiratis in charge, driving the process.

Not being able to purchase alcohol in shops isn’t a problem for me. All the bars, except one, that I know of, are in hotels, so a glass of beer or wine is fairly expensive. However, not much more so than in Jakarta. The quality of food in the hotels and restaurants is very good, so I have to watch what I eat and force myself to go to the gym regularly.

It isn’t as easy as I thought to get about, although taxis are reasonably priced, and there is a new train service. Nothing seems to be “direct” and it is difficult to walk places. My “adventure” today was to head out to “the creek” on the train. However, the train stopped two stations short, because they haven’t been built! I then waited for a while for a bus, which took us on a tour of medical facilities before dropping us at the gate of The Creek park. It wasn’t what I expected, and catered more for families who want somewhere for their children to run around.

I got a taxi to take me to the Gold Souk, which was overwhelming – is there that much gold in the world? Leaving, I spotted a sign pointing to a nearby train station. In that part of town the trains are underground, instead of being elevated, as in my part of town. I discovered that, when I changed lines on the way to the creek, if I had have gone three stations in the other direction, it would have been more to my taste.
Next time ….