July 9, 2010 · by Andrew Vivian · in Uncategorized · Leave a comment
I once read about a fictional lorry driver (in a Terry Pratchett or/and Neil Gaiman book?) who didn’t realise he was the Rain god, even though it rained everywhere he drove. It hardly stopped in Guangzhou while we were there, it rained in Sydney and Melbourne (but, fair enough, it is winter) and now we have rain in Jakarta. Helen is of the opinion that it is the dry season. It could be us, but the more likely explanation is that climate change is a reality. Hopefully, it won’t result in the sort of Jakarta floods that make the TV news in our part of the “Big Durian”.

I’m one of those people who gets a bit nervous when everything seems to be going really well. Is life supposed to be like that? For the past couple of months, it seems so.

Al Jabr Islamic School is a very good school, and we will really enjoy working there. We, and our new colleagues, will be finding our way for a while, but there is so much to build on. The main “plus” is that we pretty much all have the same educational values. There will be some misunderstandings, but we will all gain a lot during our time there. 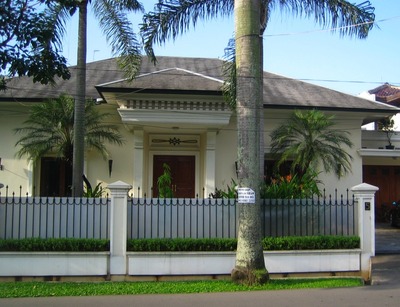 Kemang is a very nice place to live. Currently, we are “camping” in our house, with the absolute bare essentials. The good news is that our stuff landed here, somewhere, today, and shouldn’t be too far away from being hauled through the front door. Machiato will be a lot happier when that happens, because she is still getting over being bundled into a small cage, tossed into a plane for four hours, doing five days in quarantine and then spending two hours with us before we left for two weeks in Australia. The positive, for her, is that, like her three predecessors, she adores Martinie – we are yet to discover Martinie’s secret.

Three hundred metres away, Jalan Raya Kemang has a lot of restaurants and shops to explore, and we are not too far, by car, from most of the Jakarta “action”. We’ve walked most of the area this week to get our bearings, and it will take a while before we can try out everything.

Australia for two weeks was great, but too short. Everyone, including the three parents were doing well, and I managed to catch up with people from a previous lifetime (almost). Melbourne’s weather was bearable, Sydney’s was quite good and we had a few lovely days on the Sunshine Coast. (The swimming costumes stayed in the suitcase though.)

So, just about everything is going to plan (except winning Lotto, but I only bought one ticket). We are definitely amongst the fortunate ones.