May 16, 2010 · by Andrew Vivian · in Uncategorized · Leave a comment
We had a wonderful time, seeing both ancient and modern China during our one-week holiday. The first couple of days were spent in Xi’an, the home of the terracotta warriors. The area has been the base of various empires for more than 3000 years, and, ~2200 years ago, Qin Shi Huang united China, and set the stage for modern civilisation. His tomb is not far from the warriors, but it is yet to be excavated.

The first thing we did was head up top the city wall. I suggested bikes, Helen suggested a tandem. She soon wished she hadn’t – she was terrified, because everyone else seemed to walk or ride straight at us, and she had no control over where she was going. I managed to cajole her into 13 of the 14 kilometres, and she walked the last one.

We found a nice, cheap restaurant by the south gate, in a youth hostel, and discovered a neat bar street. We had a couple of wanders through the Muslim quarter, and bought a few nick nacks. 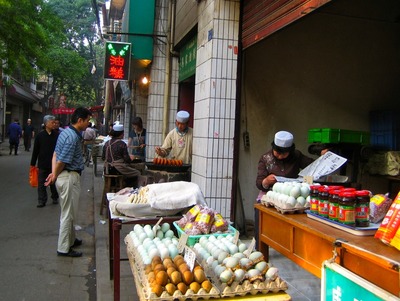 We hired a car to go out to the warriors. We had a female driver and a female guide. The guide didn’t mind that we were not going to use her. She directed us to a silk factory (Xi’an is the start of the Silk Road) where we bought a few things.

The site wasn’t as crowded as we had expected, for a Sunday in China. Before starting the trek from the ticket office to the “pits”, we bought a half-size, kneeling warrior. He will stay in the box until Jakarta. The farmer who first found the site was there, and we bought the book and got him to autograph it – the English translation is very poor, but it is conveys the story. We looked at the three pits, which were impressive, then wended our way back out, past the tourist stalls. 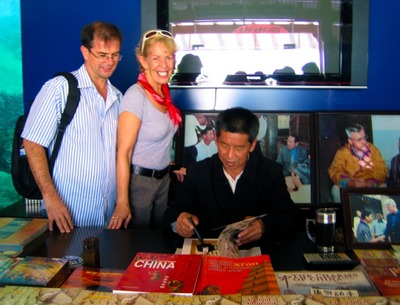 We had our last evening meal with ex-Ciputra colleague, Tjandra, and his wife, Felly. Tjandra has done his two years in Xi’an and is moving to another international school.

Shanghai was amazing. We caught the “maglev” into town, and reached 430 km/hr. The Dong Hu Hotel, in the French Concession was very nice (and should have been, for the price). There were plenty of bars and restaurants within walking distance. Helen had a list of things to do, and one of the first was the Bund. We walked the 5km there, and had a good wander around. The walkway along the river was packed with people.

We ambled through Yuyuan park to a tourist area beside it. I bought a boxed set of 12 harmonicas, one for each musical key, for well under AU$100. We met back at the hotel, and set out for an afternoon cocktail. We had an enormous nachos with a couple of margaritas just around the corner – we found that most places had great “happy hour” deals until 8pm.

The next day, we hiked down to Taikang Rd. It is a wonderful art area, with a lot of restaurants. We were a bit early for many traders, and it was drizzling. We decided to catch a taxi out to the old canal town of Qi Bao. The taxi driver dumped us in the middle of the new town and few people understood our Cantonese accents (for our 10 words of Mandarin). One young woman waved us in a general direction, and then Helen spotted one of the ubiquitous, brown, tourist signs. Qi Bao was a good place to take photographs, but not to hang around, so we caught a taxi back to Taikang Rd and had a delicious Thai lunch. 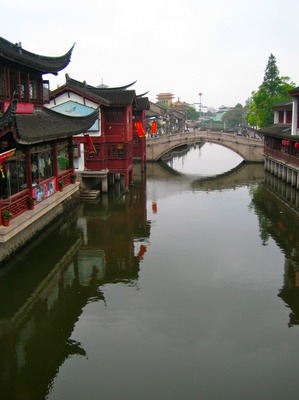 Helen had determined that, if we did nothing else, we were going to “M on the Bund” for a drink. It was really nice, although outrageously expensive – well worth the visit. On our last day, we caught the ferry across to Pudong and went up to the 88th floor of the Jin Mao tower. It is pretty amazing, although it was very hazy. The tower is hollow, and we could see 88 floors down to the bottom. We also saw two blokes come out of a higher floor on the tower beside it, on some sort of mechanical arm, to do some cleaning or maintenance. Pass on that job. We had lunch at a very nice, very classy restaurant looking back across the river to the Bund. The meal was lovely, but I was annoyed that they charged us AU$15 for a bottle of water.

Getting to the airport, we were pleased to be put on an earlier flight. We were less pleased to discover that both flights were combined, and very displeased to sit in the plane, on the tarmac, for two hours before taking off. The flight was quite “bumpy”, and, when we alighted in Guangzhou, other flights were also very late, or cancelled. After unpacking, we were in bed by 11pm. Sleep was difficult, because the heavens opened, and the lightning and thunder went on until nearly dawn.

We returned to school to find that an area where some of the families of the Chinese workers at school lived had been destroyed by floods and a landslide on the night we flew back from Shanghai. A woman who worked in our photocopy room died, as did the brother and sister-in-law of one of the gardeners. The school community has been brilliant in collecting donations to help ten families get back on their feet, and a trust fund will be set up for the daughter of our colleague.