I forced myself to go to the gym this morning, and, while I will probably regret it tomorrow, it felt quite good. We only have to motivate ourselves to walk up the substantial hill to where the tennis, badminton and basketball courts, the gym and a sort of club area are. “Only” is a bit difficult when the weather is cold and you don’t have a lot of daylight. Helen is much better at it than me, particularly in the afternoons.

Yesterday, we were back at the clothing market, for more Christmas shopping. We were there before 10am, which seemed to be a bit early for many of the clothing vendors. However, there were plenty of street vendors, particularly those selling breakfast to passersby. As usual, Helen and I went our separate ways, then met for lunch. I returned to Castle Hill with both lots of shopping, while Helen stayed a few more hours to further deplete the family finances. 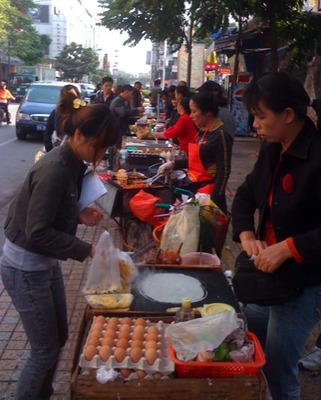 We had planned on a quiet night at home, but, as I was about to start the evening meal preparations, the phone rang, and we ended up at the barbecue restaurants on the far side of the main road with a few friends. The food was cheap and tasty, and the proprietors assured us, through the Chinese member of our party, that they did not use MSG. It was a not too cold to enjoy the walk there and back. There is always something to see, and the citizens of Yong Tai seem to operate on the “late to bed, late to rise” maxim.

Friday night saw us at The Paddy Field for the staff Christmas party. It was a really good night, and the organiser had put a lot of thought and energy into it. The different cultural groups were required to do an à capella Christmas song. So, we had Australian, British, Chinese, New Zealand, North American, Korean, Japanese, French and even a Rumanian recitation. Two of the Kiwi men even stripped off their shirts for an impromptu hakka.

Over the years, I’ve learned to appreciate the different ways that people see the world. It is really interesting, particularly at school, how similar, and yet so different, are our diverse cultural backgrounds. Age is a factor as well – I can’t get over some of my younger Australian and English colleagues, not having heard of the Goons, and how could anyone in the English-speaking world not know what a Dalek is, or had not listened to AC/DC? Likewise, I have never heard of some of the music that my two English colleagues in our School band come up with, which may be a good thing.

We’ve had a health scare – Machiato was off her feed, and not leaving anything in her dirt tray. A bit of olive oil and more wet food seems to have done the trick. however, she is now back to her usual self, which means “playing” with us incessently when we are trying to do something. She is cute though.