This is my last couple of hours in Indonesia, for a while. I’m in a lounge at Denpasar airport, which has intermittent wi-fi.

The last couple of days have been a bit tough, but more so on Martinie than anyone else. Jahe, the larger, but more timid of our two cats has been virtually traumatised by the movers – at one stage, Martinie found him down the back of the stove. Coming back from an unsuccessful attempt to finalise our phone bills, we found an empty, echoing house, which was pretty sad.

On Sunday, we did our last cycle out from Citra Raya. We have racked up quite a few kilometres over the past 7 years, and are very familiar with the local villages. This time, we were both a bit tired, so we decided to do only about 20km. We went north, through Desa Made, and found a local village market, aimed, clearly, at young children.

It was great to see everyone enjoying themselves. We also chatted to an old bloke who was selling crickets, and extolling the virtues of the incumbent president for the up-coming elections.

We ended up at the Citra Raya market, and had a breakfast of “bubur Madura” (a mixture of black rice and other stuff, covered in coconut paste and palm syrup) and “kopi Jawa” (Javanese coffee, left to settle in the bottom of the cup before drinking). 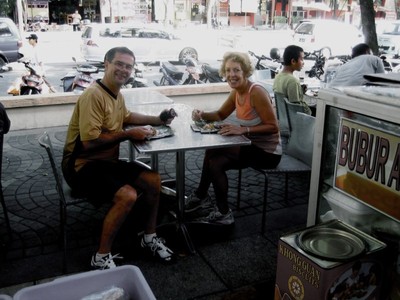 Last night, we went, with Martinie, to view the sunset from a rooftop restaurant, then had a beer with two friends from school, and their wives, which was nice.

We did our final sessions at Celebrity gym this morning – a “spin” class for me and body pump and “jump” for Helen. We hope we can find the same sort of place in Guangzhou. I am definitely NOT a gym person, but the classes are fun.

So, we enter the next phase of our lives. We can only hope that we achieve half as much as we have in the past 7 years.