We headed off with friends Rachel and Andy towards the river, to have a look at how the local celebrate the feast of sacrifice. Our route took us down the fairly major road of Jalan Raya Menganti. About halfway to the river, we could see, ahead of us several hundred of the faithful sitting in the middle of the road, outside a mosque. We, along with cars and motorcycles, were diverted left. Turning right shortly after, I came to a screeching halt, so as not to plough through another crowd of worshippers occupying the street.

The “brain surgeons” who had organised the detour obviously did not own cars -the correct right turn was “log jammed” with cars coming both ways down a street that was too narrow. We hefted our bikes past everyone, and cycled on. It is possible that some of the cars are still there.

We reached the Surabaya River and turned towards town, then crossed a ridge to the other side. Following the road south, we came to the kampung of Jambangan, famous for it cleanliness and recycling. In two places there, goats were being dispatched. 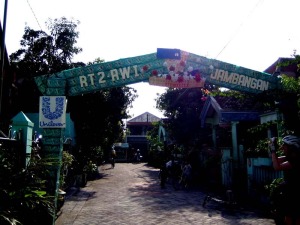 Heading south again, we were looking out for a bridge, to cross back. At a bend in the river, Helen and I both spotted a punt. We found the street into the river bank, and waited. We were charged Rp500 each (~4 cents, Australian) and alighted on the other side.

We returned through the Graha family estate, and then back through the village of Lontar. It was a good 32km for Helen and I, and a very enjoyable look at the local customs.